The recent election results around the country, and particularly in Kentucky, are certainly dispiriting for liberals. Losing the Kentucky governorship is another example of the creeping conservatism of America, just when we dared hope that Americans might be warming to more liberal ideas.

Clearly, the Democratic message is just not connecting with vast numbers of Americans. Of course, it’s hard to know from one election how much was an omen and how much was a poor choice of candidates. Apparently the Democratic candidate was not the strongest campaigner. But then again, the new Tea Party governor seems to be a bit of a dipwad himself. Which means Democrats just got outmuscled—again—on the issues and their messages.

This wasn’t a one-off loss, as this map of county voting in the 2012 election attests.1 Outside of major cities, Americans have turned their backs on Democrats. 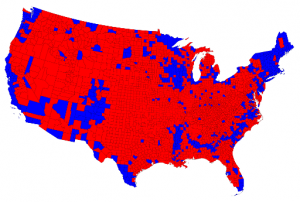 This is the grand challenge of the Democratic Party: to forge a popular message that will play in Kentucky and other moderate-to-conservative states. Democrats must find a way to communicate with mainstream Americans on a visceral level—by appealing to their values, love of country, and self-interest.

At the same time, Democrats must find a potent line of attack against conservatism. They can’t just debate issues, they must go after the very moral and philosophical foundation of conservatism.

In previous posts, The Liberal Message has offered some ideas on how to meet both of these challenges. Democratic politicians—all of them; every single one—must learn to relate every issue to a core American or humanitarian value—patriotism, optimism, American exceptionalism, fighting for the underdog, and faith and morality. They must persuade voters that voting Democratic is in their own best interest, because Democrats are the only party looking out for the American worker and the poor. In the same way, they must characterize conservatism as mean-spirited, stingy, an affront to basic American values like fairness and equality, and unworthy of a great nation.

Only a unified front of Democrats communicating the same strong message can begin to turn the tide of Republican hegemony in the South, Midwest, and rural West.

1 Many have pointed out that this famous map can be misleading, since it reflects geography more than number of voters. But it’s useful in pointing out that Democrats are losing large tracts of the U.S., and it helps explain why Republicans are dominating governorships and state legislatures.