Here’s a dull, under-the-radar economic story that is actually tremendously positive news for Democrats: Last week Federal Reserve Chair Janet Yellen gave a speech about the state of the economy in which she raised the question of whether the U.S. was at full employment.

Her answer, alas, was no, not yet. But the fact that she would even bring up the subject is amazing. She felt compelled to ask the question after job growth of nearly 300,000 in October and 211,000 in November (and 2.3 million jobs so far this year). The Wall Street Journal says that if job growth continues to average 200,000 a month, the nation should reach full employment in 2017. Which means we would be very, very close by the time of the November elections.

In any case, the nation’s unemployment rate now stands at just 5%, among the lowest rates in the last 60 years and a full point below the average of 6% since 1955.

These figures demolish two of the Republican Party’s most precious talking points:

These numbers also raise another question: Why aren’t Democrats getting more credit for a pretty rosy jobs picture?

Ronald Reagan’s presidency was also hit by a major recession in its first years, when unemployment hit almost 10%. But by his last year in office the jobless rate had fallen to 5.5%, and Republicans crowed that it was morning again in America. Now it’s significantly lower—5% and falling—yet Donald Trump and his fellow conservatives are pretending that America is somehow going to hell.

For one thing, Republicans are moving the goal posts. They love to point to a broader set of labor statistics that take into account workers who are working part time but want full-time work, plus discouraged workers who aren’t even looking for jobs but say they would like to. Under these “alternative measures of labor underutilization,” according to the Bureau of Labor Statistics (BLS), the real unemployment rate is now 9.9%.

But this isn’t a new phenomenon. Here’s a BLS chart showing the alternative unemployment rate going back to 1994. As you can see, this so-called U-6 number (the top line in the chart) tracks proportionally with the unemployment rate (the black line in the middle labeled U-3). Presumably this was also true a few years earlier, in 1988, when it was “morning in America.” 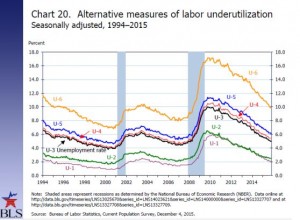 The Republicans—and the media, too—aren’t comparing apples to apples. The truth is that unemployment—however you measure it—is still not far from its historic lows.

Another reason Democrats aren’t getting credit is no doubt because Americans are still psychologically hung over from the Great Recession. Wages have been stagnant for a couple of decades, relatively high-paying manufacturing jobs are disappearing, and many Americans are underemployed.

To be sure, these are serious issues, and ones Democrats must pay attention to. But the relentless drumbeat from Republicans and Fox News that America is somehow falling apart is clearly, empirically false. By most objective measures, and certainly by comparison to the rest of the world, the American economy is doing pretty well.

In a coming post, we’ll talk about the desperate need for optimism in America, and why it’s time for Democrats to start bringing some good news to the nation.