The New England Patriots have been a powerhouse in the NFL for many years, and one reason, football commentators say, is because of coach Bill Belichick’s proven strategy: Find your opponent’s greatest strength and attack it.

That principle serves equally well in politics, of course (just ask Karl Rove). The Liberal Message has been advocating that Democrats must launch a concerted attack not just on specific Republicans but on conservatism itself. So how can the Belichick strategy be applied to an entire political ideology?

Here are four perceived strengths of conservatives (at least among moderate and conservative voters) and how Democrats should attack them.

END_OF_DOCUMENT_TOKEN_TO_BE_REPLACED 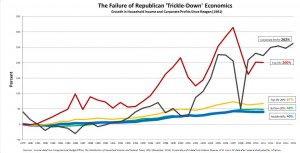 As detestable as the speechifying was at the GOP debate last night, we have to admit, from a purely clinical standpoint, that the Republicans are very, very good at messaging. Almost every candidate, with the exception of Bush and, to a lesser extent, Kasich,were absolutely superb in the art of the soundbite and in appealing to their audience viscerally and emotionally, by wrapping almost every issue in traditional American values (however falsely).

They also understood the immense value of free air time for attacking Democrats. Whether they were coached by the RNC or simply understand it instinctively, they were linked arm in arm in their relentless—and effective—rage against Clinton and Obama.

We can only pray that Democrats were watching and learning for their own debate Sunday (though past debates haven’t been encouraging; see the post “Democrats: Stop Being Polite!“) Democrats must understand who the true opponents are on Sunday—and they must remember not to attack individual candidates, or just “Republicans,” but conservatism.

If the Democratic candidates need some suggestions, here are a few unsolicited soundbites for Sunday, just off the top of our head. We hope Democratic communicators are hard at work thinking of more.

The new year is always about hope and self-reflection. Democratic candidates who hope to win over moderate and independent voters may want to reflect on these suggested New Year’s resolutions.

1. I will not discuss issues without discussing values.

Democrats must appeal to voters’ hearts, not just their heads. To do that, they must explain how their ideas are rooted in American traditions and values, such as:

Every issue must be linked to the greatness of America and our role as a superpower, to our highest aspirations as a society, or to the moral character of our nation. For examples of how to do this on specific issues, see The 7 Winning Messages of Democratic Politicians and related posts.

To win over moderate and conservative voters, Democrats can’t just quarrel about issues—they must delegitimize the very foundations of conservative ideology. They must counter the incessant memes that Republicans are the party of freedom, patriotism, morality, and fiscal responsibility.

It is absolutely crucial that Democratic candidates begin attacking not just Republicans but conservatives. Start using the words “conservative” and “Tea Party” interchangeably with “Republicans.” Every Democratic spokesperson—not just those up for election—must constantly paint conservatives as:

Democrats must begin raising doubts in voters’ minds about the competence of conservatives and their ability to govern. Remind voters about government shutdowns. Blame the Tea Party for the gridlock in Washington. The point is to recast “Tea Party” and “conservative” as pejoratives, in the same way Republicans have managed to do with “liberal.” Every Republican candidate is now the de facto spokesperson for every nutty, dangerous, or mean-spirited idea conservatives have, nationally or in the state candidates represent. Eliminating the inheritance tax for multi-millionaires, privatizing Social Security and Medicare, slashing food stamps for the poor, taking health care away from millions of Americans, cutting disability benefits, shutting down the government, threatening to default on the U.S. debt—conservatives own all of it.

3. I will be a proud Democrat.

If you don’t think the Democratic message will play in your purple or red districts, then you are telling the wrong message! Democrats are the party of:

That’s a message that should play anywhere.

It is the job of every Democratic candidate to reinforce the Democratic brand. Every candidate needs to encourage Americans to vote not just for him or her but for Democrats generally. The message is that Democrats are the party of the people. We have been on the side of unions and workers for a hundred years. We are defenders of the poor and middle class. We have been the engine that drives progress in our nation, from women’s rights and civil rights to Social Security, the minimum wage, and health care. Every significant improvement in America’s quality of life in the last century has come from Democrats. Tell the story! America does not move forward without the Democratic Party.

4. I will speak with unwavering conviction.

Americans admire politicians who know what they stand for and fight for it. Do not waver, dissemble, or apologize. Do not abandon your president or your party. That doesn’t mean you can’t be strategic. It doesn’t mean you have to be hyperpartisan, or that you can’t position yourself as willing to work across the aisle. It does mean candidates have to believe passionately in the Democratic cause.