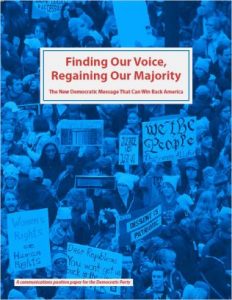 After the Democrats’ demoralizing loss in the recent Georgia special election, The New York Times ran a headline with this quote from a Democratic congressman: “Our Brand Is Worse Than Trump.”

He is exactly right. In much of the country the Democratic brand is toxic. Since Reagan, conservatives have done a remarkable job of defining liberals and Democrats for the public as tax-and-spend, weak-kneed, anti-American, abortion-loving, godless libertines. Worse yet, Democrats have let them get away with it, with no real rhetorical counterattack against conservatives. The results have been disastrous. Conservatives now control all three branches of national government-the presidency, Congress, and the Supreme Court-along with three-fifths of state legislative houses and governorships across the country.

Curiously, while voters are soundly rejecting Democratic candidates, they’re not rejecting Democratic policies. Poll after poll shows that a majority of voters agree with Democrats on many major issues, from health care to climate change to immigration. That can mean only one thing: Democrats have a serious image problem. Voters simply don’t like Democrats. They have no idea who they are, what they stand for, or how the party plans to help them.

Democrats desperately need a new message, and they shouldn’t underestimate the mountain they have to climb. Restoring their image will take an enormous marketing, advertising, and communications campaign.

It can be done, but Democrats need a plan. Luckily, we happen to have one.

“Finding Our Voice, Reclaiming Our Majority” is a 28-page communications strategy to help the Democratic Party rehabilitate its image and recapture the minds and hearts—especially the hearts—of the American people. This position paper lays out four primary messages the Democratic Party should convey:

“Finding Our Voice” justifies and outlines each of these messages and gives specific examples of how Democratic politicians and spokespeople can incorporate them into every political discussion.

The paper also offers a three-step plan of action for communicating them to the public.

Democrats have an amazing story to tell. We hope party leaders will take a look at “Finding Our Voice” and reimagine how Democrats communicate with America.